Our Muscadet offerting are hand-selected for their exceptional quality. Muscadet wines make delicious aperitifs and pair well with oysters, shrimp or scampi. 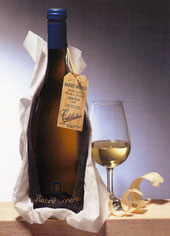 When approaching the cold season the lees start to fall, wines mature, their outline emerges and asserts itself.
It is time to start working for the specialist of a very special, envied science verging with the esoteric.
Scouring accross Gorges, le Pallet, La Haye-Fouassière, Monnières, Saint Fiacre, Maisdon sur Sèvre and other reputable villages he tastes and tastes without stopping. Like a matchmaker he invents new and happy unions. Based on marks known only to him, taking here and there, he matches, complements, harmonizes, refines. Before our eyes the parts of the jigsaw are fitted together . We witness the birth of Les Printanières, les Mesnils and la Réserve Beau Soleil.
All three are heir to the same area and share common characteristics :
- to the nose their fine and characteristic aromas evoke vine flower, apple, haymaking, citrus fruits.
- to the mouth their structure of fresh wine, both tender and acidulous delicately resentful of salt and their native climate.

However the 'birth-giver' has wanted a different character for each of his children
- Les Printanières sur lie : ardour and vigour
- Les Mesnils : wisdom and serenity
- La Réserve Beau-Soleil : lighness and joy
The first two wines go well with seafood gastronomy, the third one is less ambitious but just as important. It is indeed both the wine you drink in the morning with friends, the vin de plaisir, and the vin loisir.

A genuine product of Touraine, one of the favourite soils for the Sauvignon variety where it supposedly originates. Indeed in the XIXth century some old vines called "surin" were used as the first grafts during the restoration of the wine region after the phylloxera disease.

This wine is elaborated on sandy, gravelly soils or flinty clays called "perruches". It has the characteristic freshness, fruitiness, country charm and liveliness of the Jardin de la France.

This very old wine area was at many times menaced by climatic (frost, hail) and epidemic setbacks. Althouth it nearly disappeared several times its 200 ha enjoy brighter days thanks to its undisputable qualities.

Lying on the terraces of the Cher river between Vierzon and Bourges, planted on old soils mostly made of alluvial sands and terrace gravels, a few soils made of marl, clay and chalk, the Sauvignon variety produces a very rich white wine, with authentic notes of fruit and flowers, without any vegetal resurgences, and is admirably supported by a generous body and shape.

After having dedicated over 1000ha to the production of Chasselas table-grapes the vineyard of Pouilly sur Loire changed varieties after the phylloxera episode (end of the XIXth century).

Sauvignon, locally called Blanc Fumé, gradually imposed itself and now occupies more than 500ha whereas only a few plantations of Chasselas still remain.

There is no production of red or rosé wine in this appellation zone even though some Pinot noir plants can be found here and there (meant for family consumption).

Sancerre and Pouilly Fumé are mostly defined by the intensity and complexity of their floral and fruity aromas.

With a strong, athletic body, refined and nervy but also dense and round these wines seem to last forever in the mouth and nose without losing an ounce of elegance.

Quincy, Sancerre and Pouilly Fumé should be served with rock lobster, lobster, dried or smoked fish and snails.

All three suit remarkably the finest and most noble sea and river fish. The best cuvées, especially from Pouilly will be able to accompany white meat (such as blanquette), tender poultry or a mellow calf sweetbread dish.

-The excellent association of Sancerre blanc and Crottin de Chavignol goat cheese should be mentioned.

Lying on a massive block of tuffeau the shallow and chalky soil is made of small stones, sand and a little clay. With an exceptional climate in the South East of Saumur it is the best possible soil for Cabernet Franc in the Loire Valley.

Spreading over more than 1200 ha it produces approximately 6 million bottles of a red wine that has conquered the market within less than 30 years.

The colour can be ruby, purple and dark red, with violet glints when young.

Aromas are mostly in the category of red berries, with floral notes.

In the mouth we have a firm attack in accordance with the colour, then on soft, refined tannins one finds an irresistible, velvety suppleness which is quite typical of this wine, like the first sensations mixing the first floral notes with humus, moss and mushroom.

A region of transition both in terms of its climate and soils, the West of Touraine is under the influence of the ocean and is adapted to Chenin and Cabernet Franc, whereas the East is under a continental influence where Pinot Noir, Gamay and Chardonnay flourish. Soils are mostly made of clay, flint, chalks, alluvial sands, terrace gravels. This diversity allows the cultivation of all kinds of varieties.

Within this abundance of varieties the main appellations are Bourgueil, Saint Nicolas de Bourgueuil, Chinon, Touraine Sauvignon and Touraine Gamay.

It has inherited from Touraine a lively and light outline which go well with Loire, Cher or Atlantic fried fish.

In Saint Nicolas de Bourgueil and Bourgueil, the alluvions, sands and chalk fragments at the bottom of the slopes produce light and fruity wines which can be enjoyed from the first months of their existence which rarely lasts over three years.

Higher up on the slopes where tuffs are predominant wines get stronger. They take more time to mature, will reach extraordinary levels and will last longer.In Saint Nicolas de Bourgueil and Bourgueil, the alluvions, sands and chalk fragments at the bottom of the slopes produce light and fruity wines which can be enjoyed from the first months of their existence which rarely lasts over three years.

Higher up on the slopes where tuffs are predominant wines get stronger. They take more time to mature, will reach extraordinary levels and will last longer.

In Chinon aswell the wine region can be visited in successive steps.

On the bottom terraces by the river, gravels and sands, with little clay produce supple and fruity wines, adorned with all their qualities from as early as spring.

Higher above are found more clay, less chalk and sand : the wines, while remaining very delicate and flattering take strength and some structure as they are both spring wines and wines for ageing.

At the very top on the plateau, in strong and heavy chalky clay soils grow "les Grands Chinons" whose structure and richness allow them to compete with their "Grand Cousins" from Bordeaux.

These delicate and aromatic wines are recommanded for entrées, pork and poultry meats. They will also accompany fish with more or less success. It is to be noted that due to the structure of its colour Chinon is recommanded for the elaboration of red wine sauces.

The strongest wines will accompany red meats, game and all types of cheese, and more especially the local goat cheeses.

The Sancerre AOC vineyard covers an area of 2300 hectares in 14 communes. The vines, which are mostly devoted to the production of white wines, are planted in a landscape of rolling hills and valleys. Three types of soils have evolved over the ages - the "terres blanches" (literally the white earth), the caillottes (pebbles) and chalky-clay soils, and these produce a whole range of different wines. Pinot noir vines occupy 491 hectares of the total area. Average annual production is 25000 hectolitres (red and rosé wines) and yield is 55 hectolitres/hectare for the production of red wines and 60 hectolitres/hectare for the production of rosé wines.

The red Sancerre wines have Morello cherry and red fruit aromas. They are firm, full bodied wines with a long finish and are well suited for ageing.

AOC Rosé de Loire wines are produced within the AOC Anjou and Saumur area of production. These vineyards cover an area of 900 hectares and produce around 35000 bottles of wine annually. Some AOC Rosé de la Loire wines are also produced from the Touraine area, although quantities produced are quite small.
The Rosé de la Loire appellation was first awarded in 1974 for wines made from a minimum 30% Cabernet franc and/or Sauvignon, with or without the addition of Grolleau, Gamay, Cot and Pineau d'Aunis.
Rosé de Loire wines are characteristic of the grape variety used in their production and of the terroir from which they originate.
They are clean, light and very refreshing with dominant fruit aromas. The average yield is 60 hectolitres/hectare.

This wine is obtained with the vat-bleeding technique from Anjou rouge. It is an elegant dry rosé, with delicate aromas, and obviously a beautiful summer wine.

It is sufficiently structured to accompany a number of seasoned dishes and even fried fish.

It is a wine to be enjoyed under a barrel-vault on a hot, lazy afternoon.

EYE : The robe is pink to salmon-pink and is very glittering.
NOSE : Freshness is quite obvious to the nose. Notes of red berries (redcurrant and blackcurrant) and red fruits (strawberry and raspberry) mingle with the delicate vegetal nuances of Cabernet.
MOUTH : The attack is supple and balanced. A fleshy, complex body can be enjoyed after some intermediate floral notes. Length is ensured with suppleness.
BEST SERVED : at 13-15°c, with aperitive, grilled meat or fish, summer salads, and, possibly, desserts with fruit.

This Appellation also derives from the richest red wine bleedings. Fementation is carried out in order to save the last sugars of the grapes.

This ensures a delicate wine whose light sweetness underlines the floral fruitiness without any alteration to its outline.